Modesty in the 21st Century 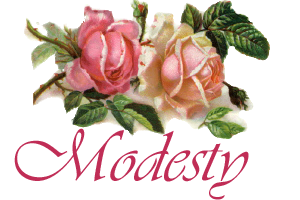 Modesty is a word not well known to many women of the 21st Century.  It has become a faint memory of a bygone time when civil hearts embraced lifestyles that had depth and true meaning. We now live in an age when words are represented by a string of letters in a text or tweet that is cold, faceless and lacks depth.  Even the Word of God has become somewhat of a timeless fairy tale.

However, for every woman whose heart has been touched by The Master, a New and Living way of Life has been introduced to them.  They, by the power of His Holy Spirit that indwells them, know that this 21st Century culture is not their culture and their modest lifestyle stands in stark contrast to those who encounter them. They tend to stick out like a sore thumb among the loud and flamboyant styles imparted by Vanity Fair, Hollywood and Victoria’s Secret, to name a few.  They understood fully, by revelation of The Spirit of Truth, what St. Paul meant when he told Timothy how to instruct those women who had truly yielded their lives up to the New Life Jesus had prepared for them.

They understood perfectly what was meant by Paul’s desire that – “… women be modest in their appearance. They should wear decent and appropriate clothing and not draw attention to themselves by the way they fix their hair or by wearing gold or pearls or expensive clothes. (1 Timothy 2:9).  They knew because they had truly surrendered their old culture of life for the New and Living Way Jesus revealed to their hearts by way of the Holy Spirit.

As those transformed women of God spent more and more time learning about the will and character of God they understood that trying to keep up with the Joneses no longer mattered. They realized that they didn’t have to look like their culture in order to be accepted because their hearts were set on pleasing The One Who saved their souls.  These women knew that “…The Lord doesn’t see things the way (we) see them. People judge by outward appearance, but the Lord looks at the heart.” 1 Samuel 16:7(NLT)

These women understood that this world’s culture was no longer theirs.  They longed for the promised transformation the Holy Spirit was making in them.  They believed in the new identity they were given by God who said…”…you are a chosen people. You are royal priests, a holy nation, God’s very own possession. As a result, you can show others the goodness of God, for he called you out of the darkness into his wonderful light. “Once you had no identity as a people; now you are God’s people. Once you received no mercy; now you have received God’s mercy.” They understood that “…as “temporary residents and foreigners”  -  (they needed to) keep away from worldly desires that wage war against their very souls. They were careful to live properly among their unbelieving neighbors..." 1 Peter 2:9-12

You see, those redeemed by God willingly embrace that they no longer are representative of this world’s culture, styles or mindsets.  They realize that their “…body is the temple of the Holy Ghost which is within them, which they have of God.  The Lord says... "you are not your own! For ye are bought with a price: therefore glorify God in your body, and in your spirit, which are God's. 1 Corinthians 6:19-20

Women who have had a genuine encounter with The Spirit of God desire only to bring glory to God – not to themselves.  You won’t find them wearing or adorning themselves with clothing, jewelry and anything else that would draw attention to themselves. They won’t be found wearing clothes so fitting as to reveal their every curve, nor will they wear clothing so sheer that it offers the eyes of others a view of their cleavage or intimate parts of their bodies.  They would never think of drawing the eyes or longing of men, causing them to commit sin in their fragile consciences – all for the sake of being seen and looking like this world's culture.  No, they would never cause their God given freedom to “… cause another believer to stumble (Romans 14:21).

In closing, women of genuine faith understand that “A beautiful woman lacking discretion and modesty is like a fine gold ring in a pig’s snout (Proverbs 11:22).  They understand that “Those who let themselves be controlled by their lower natures live only to please themselves, but those who follow after the Holy Spirit find themselves doing those things that please God" (Romans 8:5).  Any woman who is filled with the Holy Spirit knows and understands modesty because she has been taught by The Holy Spirit and follows His leading.

Listen, daughter, and pay careful attention:
Forget your people and your father’s house.
Let The King be enthralled by your beauty;
honor him, for he is your Lord.